This site uses cookies, for analytic purposes and to provide enhancements to the user experience. If you click the "Accept Cookies" button, you can continue without further intrusion. Otherwise, you can click the close button at upper right to hide this notice, but your use of this website may be impacted. For more information visit our Privacy Policy page.

” . . .  How cold the vacancy
When the phantoms are gone and the shaken realist
First sees reality.”

November 2004 just after the re-election of George W., we went to India. A third version of the Indian taxi ride seemed likely and I saw I must include myself in the painting.  As the composition evolved (see below) I invited my husband to join me in a foreground crowded with the paraphrenalia of touring: a map (albeit outdated), food & water, a shopping bag, backpack, purse–and a camera.

From the beginning (1978), confronted with the splendors of Indian street life, I had used a camera, moving its findings onto canvas, at first tentatively, then with enough confidence to show my work to friends there. Responses were disappointing. People were polite but unimpressed. “Where is the irony?” someone asked. Clearly I had avoided subjects which might call for feelings beyond the considerable awe engendered by any walk down Indian streets.  Travel to India had been a moon voyage: whether I feasted my eyes or averted them didn’t matter. Indian critics were right to question a censored view of their country. But how, I had wondered, could I confront negative social realities as a guest, not as a person involved in India’s all too apparent sorrows?

I’m not sure what changed in 1999 on the penultimate voyage. Maybe it was connecting with the characters in Rohinton Mistry’s A Delicate Balance. Maybe it was a nasty fall into a pothole on a dismal day when I felt abused by bureaucrats and bankers. In any case, in 2004 I cast aside political correctness and began to photograph India’s notorious beggars. Within the protective metal skin of heavy taxis piloted by impressively turbaned drivers, I looked at faces.

By this time the pain of endless war made it clear such misery was a threat to us all and had a history that overlaid most of my time on the planet. As the street phantoms, blue like the gods in Indian miniatures, entered the picture, I added some readymade icons from other times and places. Beginning to the right of the driver are (below the Dow Chemical diamond logo in the front windshield):  Kim Phuc, the 9 year old Vietnamese napalm victim caught in Nick Ut’s photo of 1972; then (skipping over the mid-right window which pictures a family from Vizakhapatnam where we visited in 2004) Samar Hassan at age 5 in Tal Afar, Iraq, 2005, just after her parents were riddled by gunfire from US soldiers. (Borrowed from a photo by Chris Hondros, photo journalist who died this year in the Libyan conflict) Over her head, a crying woman quoted from Picasso’s Guernica, 1937, and close up on the far right an unidentified woman and child who were victims of the 2004 Tsunami which struck the eastern coast of India just after we left at the end of December that year. The source of this picture is a photo appearing in the January 2, 2005, NYT, and is the work of Dibyangshu Sarkar.

Quite naturally, over the heads of this spectrum of immiserated people there appears a stack of billboards of the sort that compete for visual space along streets and highways in India.

These “ferocious alphabets,” logos chosen to characterize the controlling principles of institutions dedicated to varying forms of organized violance, include:  Lockheed Martin, Raytheon, and, yes, a local Seattle aerospace manufacturer. Some actually participate in privatized warfare: Halliburton, Blackwater. Some produce economic tragedies: Chase Manhattan, BOA. Some have combined massive human incompetence with the powers of nature, adding our own disorder to disaster, creating catastrophe on truly colossal scales:  BP (April 2010, Macondo Oil Well) and Tepco/General Electric in Fukushima. Special mention is given to Union Carbide, the company responsible for the Bhopal chemical explosion of 1984. Note the resemblance of the small 2004 tsunami victim in Bubble to an iconic picture from the earlier event: 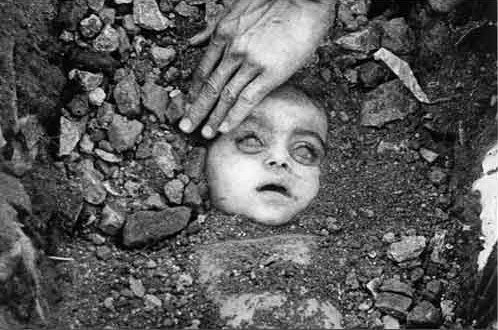 Centered in the painting is the oil truck vanishing into the distance to the left of the driver’s head. I used a stainless steel American version of this vehicle although in India it would have looked more like this: 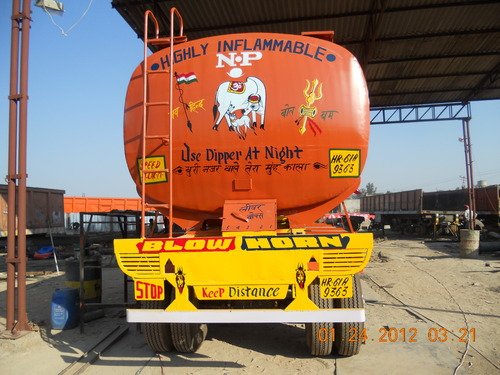 The fine print on this and many other tankers is a Hindi inscription which reads: “You With the Evil Eye May Your Face Be Covered With Soot.” (Thank you, Manish!) It is this warning which appears across the ceiling of  the Bubble. As I mentioned in the blog’s inaugural post May 1, this sentiment was found in a kinder, gentler version on Indian vehicles like the scooter taxi of “Marigolds I” (see above) painted in 1990: “You With the Evil Eye May You Also Be Blessed.” But that was then.

“Bubble” diagrams the victims of corporate imperialism, living (to twist a phrase from Stevens) in a place not their own, in spaces begrudged them by controlling principals whose designs promote profit at any expense.  Meanwhile “passers-by and through” of all stripes maintain good supplies of clean drinking water and fresh fruit, ordinary claims on the stuff of existence which, as a foreground to so much suffering, sadly assume overtones of evil.

The epigraph above from Stevens’ Esthetique du Mal  was written in the context of World War II.  As he moves to close his poem, Stevens comments that “the right chorale” for evil is neither sight nor sound; it must be “scrivened” by poets:

“One might have thought of sight, but who could think
Of what it sees for all the ill it sees?”

Indeed, the question arises whether any painting can gather enough aesthetic force to carry such meaning.  Luckily, its painter needn’t decide about this.

Below a succession of stages as “Bubble” evolved: